The failure of Seaton Jurassic at a cost of £5.5 million (not including running cost losses) is not only a waste of money but also a wasted opportunity.

This talk will explore the motivations behind the push to establish 'SJ', as it was affectionately known, why it failed and what opportunities for the World Heritage Site have been missed as a result.

The obvious opportunity, and the real requirement for effective management of the Site, is to acquire and display the astounding fossils from the West Dorset coast, a project put forward by the local collectors and a project ignored by the management of the World Heritage Site. To date, something like £38 million has been invested in visitor centres and museums, none of which delivers what the World Heritage Site truly has to offer and which it really needs (with the notable exception of the Etches Museum of Jurassic Life at Kimmeridge). As a result, there is a very real risk that the astounding fossils will go somewhere else, somewhere that does recognise their value and has the ambition to realise it.

Should that happen there is only one organisation to blame: the management of the Site under the auspices of Dorset and Devon county councils. Is it too late? Quite probably. That said, the Jurassic Coast Trust, the organisation now taking responsibility for the Site, has been working on a 'Jurassic Coast Collection' for over two and a half years with some £140k of charitable funding, yet there is still (July 2022) no sign of a list that might define a collection. Can they save the day? The clock is ticking.

Richard Edmonds 'got' fossils, and therefore geology, on that beach back in 1972. He was the first and former Earth Science Manager with the Dorset and East Devon, Jurassic Coast World Heritage Site team but quit seven years ago seeing what was going wrong coupled with the inability to even have a discussion about what the right direction might be for the Site. Prior to that he ran the Charmouth Heritage Coast Centre (1986-1997), the closest visitor centre to SJ, but for which he was never asked for any input. Since leaving Dorset County Council he has not quit World Heritage as, in his own words, 'Someone has to champion the interests of the Site'.

He advised on Jurassica, a monumental proposal for Portland, and is now 'pretired', taking a well worthwhile 35 year retrogressive step in his career by acting as a fossil guide for Lyme Regis Museum.

The drawing is a thank you letter to Richard Edmonds from a kid on a fossil walk from the Charmouth Heritage Coast Centre in the early 1990s. 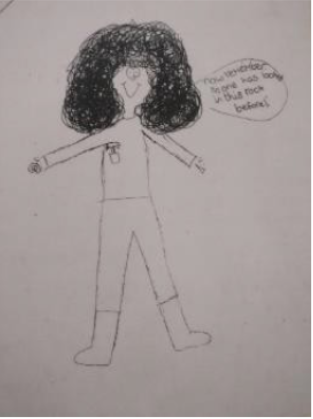